HANNAH WICKLUND and Luke Mitchell grew up with a seven-year age difference and a home full of instruments. With early passions for music, it was clear the siblings were destined to live creatively fulfilling lives.

Now, Wicklund fronts the explosive rock trio she formed at age nine, The Steppin Stones, and Mitchell helms beloved Charleston Americana/indie rock band The High Divers. The two bands start 2018 with The Sibling Rivalry Tour, a trip that will outdo any family vacation.

We chatted with Wicklund and Mitchell about competition, musical growth, and how they’ll handle spending two and a half months of shared van life.

You did a smaller version of the Sibling Rivalry tour last year, right?

Hannah Wicklund: We’ve done two versions, but they were one-off shows...This is our first actual tour. At the end of it, it will be around 55 dates, so it’s the first of its kind.

What made you decide to expand it?

Wicklund: It felt like a natural progression. Luke and I have been on parallel paths, and we’re in the same arena now.

Hannah, who’s playing with you in the Steppin Stones now?

Wicklund: The High Divers are the new Steppin Stones! Luke plays drums, and Kevin is playing bass. It made sense. We’re fashioning it after the Tom Petty/Bob Dylan tour where Tom Petty & The Heartbreakers backed [Dylan] up, Tom included. We’re huge Tom Petty fans in this family. What Would Tom Petty Do?

A great question to keep in mind. Y’all grew up in a very musical house—did you play together?

Mitchell: We would play together every once in a while. Hannah was so much younger than me—when you’re 15 and your sister is seven years younger, that’s a huge difference. As we got older, that age difference started losing its traction, we played more together. It’s always been a very competitive thing in our house. Sometimes, I felt kind of bummed out as a kid. Music is not supposed to be competitive! But it’s a healthy competition now. It was very musical in our house at all times. My stepdad—Hannah’s dad, Matthew—he’s always a very big champion of playing music and being creative. So is our mom. She’s a landscape painter and makes sculptures. They always pushed us toward that instead of away from it like most parents.

How old were you when you started playing music?

Wicklund: I was three when my parents got me my first piano. I played piano and did classical competitions...I played a ton of Beatles songs on piano. When I was eight, I started playing guitar, and that’s when my dad got me my first baby Taylor acoustic. I started the band six months after. My first gig playing piano, I actually opened up for Luke’s first band, The Gnomes!

Mitchell: I started playing around eight and started taking drum lessons. Someone asked me the other day: “When do you remember wanting to play music?” And I just can’t remember not wanting to be a rock star. That’s always been there.

What kind of music were y’all listening to growing up? Were you always big Pettyheads?

Mitchell: Oh yeah, I was in a Zeppelin cover band with Kevin, our bass player in our band now. We listened to Zeppelin and Beatles, all the classic stuff. We still do. I love newer music, but it’s hard to find stuff that you really vibe with these days.

Wicklund: It was easier with classic rock to really fall in love with a band and a whole catalog. My band, we covered Janis Joplin, Hendrix, and I’m a huge fan of late-‘60s, early ‘70s music. But Tom Petty, Zeppelin, Neil Young—huge influences. 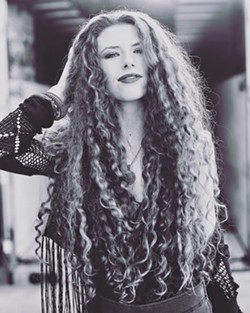 How old were you when you started gigging out?

Mitchell: We played down at our local park when I was 12 or 13, played middle school dances and stuff. That was awesome, nobody knew what was going on then! After that I started The Gnomes and we played regionally, but mostly Hilton Head and Bluffton. We got pretty big! We were huge!

Luke, you headed up to Charleston, and Hannah, you’ve been in Nashville. What’s it like coming home and reconvening after these separate musical experiences?

Wicklund: A lot has happened for me personally. Moving away from home...I lived in Charleston for a year before Nashville, and I’ve been there for about a year and a half. I’ve been touring pretty much the whole time I’ve lived there. It’s really nice coming home and being with Luke, and also I’ve been going through a transitional period. For the first 11 years, it was The Steppin Stones, then I added my name in September. It seemed like that was the way it was supposed to go.

Mitchell: It seemed like the band name wasn’t long enough...

Wicklund: [Laughs] It's awesome coming back and going on the road with Luke, Mary Alice, Kevin, and Julius, because I haven't been around family in close quarters in a couple years.

Have you ever traveled for this long together?

Mitchell: No, we used to get in the van to go to family reunions in Michigan and want to kill each other.

Mitchell: I remember on one trip, Hannah was nine years old and she told me to go die in a corner! Maybe now she can make that happen!

What do you consider one another's great musical strengths?

Mitchell: I think Hannah is really good at being emotive as a singer, and she's good at placing her guitar solos into her songs. She plays with the melodies, and she's a great songwriter.

Wicklund: Aw, thanks Luke! I've always admired Luke's songwriting—I think that's been his driving force. Ever since I can remember, he's always been cranking out his own music every day. And he's pretty entertaining as a frontman.

Hannah, you have a new album coming out soon.

Wicklund: January 26 we're releasing it! I recorded it in Nashville at this killer studio. Sadler Vaden produced my album, he's the guitar player for Jason Isbell and The 400 Unit. Working with him is great—he fronted a three-piece rock 'n' roll band, and he's a killer guitar player, and he's from South Carolina, too. It's my proudest album.

Mitchell: We also have our second record coming out March 2, called Chicora. We're working with a small label housed under a bigger label, True Blue Records out of Athens. We're really excited. It took us forever to record it and put it out—we got hit by that semi [Note: Last year while on tour, The High Divers were in a car accident that flipped their van and injured all of the band's members and crew]—so we had to push everything back, so it's long overdue.

Any collaborative surprises in store for the tour?

Mitchell: We're going to be playing some of our favorite songs, maybe a couple of covers that lend themselves to having that many people onstage.

Wicklund: It's definitely a family affair.