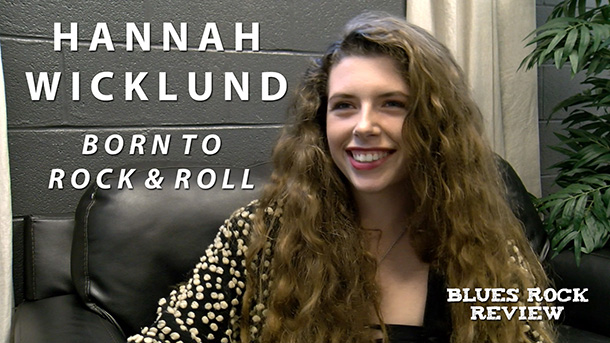 Hannah Wicklund is a 22-year-old guitar phenom and while she may be young, Wicklund has been playing shows for 13 years.

Wicklund sat down for an interview with Blues Rock Review Editor-in-Chief Pete Francis to share her story.

“My dad likes to say he put me through the school of rock,” says Hannah Wicklund.

At 22 years of age, Hannah Wicklund was born to rock and roll. Her father is a musician and her brother plays in the High Divers.

“I started the band when I was eight years old and we started playing out shows when I was nine and the snow ball just kept going,” says Wicklund.

Wicklund graduated high school at just 16 years old and has been on the road touring ever since.

“It felt completely normal. I had essentially already been doing it. I’d been playing every night of the week when I was in school anyway, so when I got out on the road it was just way more fun.”

She’s also an independent artist in North America, handling everything from publicity to being her own tour manager.

“I’m in complete control right now, which feels really nice and my last record I put out on my own label Strawberry Moon, and I think I’m learning so much by doing it this way.”

An experience Wicklund believes will help her down the line as her career continues to grow.

“I am 22 years old, so I have a lifetime to be on a label or have so and so doing this or that, so maintaining my control for now and making my own mistakes and learning from them.”

Now the South Carolina native plans to expand to Europe and the UK with Hannah Wicklund and the Steppin Stones’ self-titled album.

“It’s coming out in September. It’s essentially a re-release over there and we’re redistributing it over there for the first time, so I’m really excited. It’ll be our first ever tour.”

And more new music is on the way.

“I’ve got a healthy portion of the new record done as far as writing goes. We’ve haven’t gotten into the studio yet, but at the end of the year we’re gonna get in the studio and hopefully the record will be out soon.”