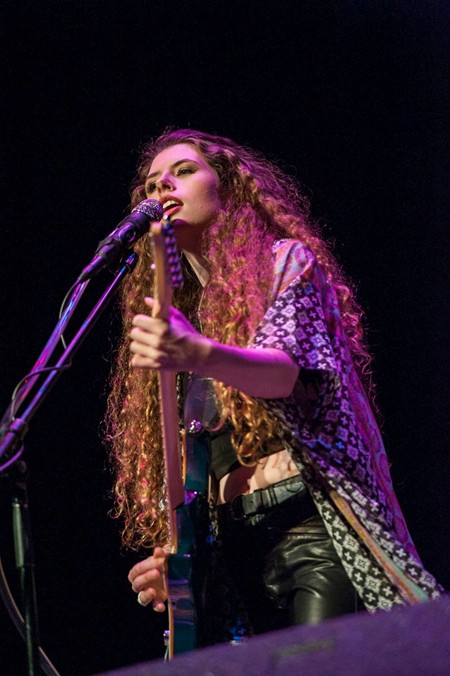 AT A TIME when most kids were organizing their stuffed animal collections, Hannah Wicklund was assembling a guitar pedal board.

The South Carolina native and founder of all-American rock ‘n’ roll band The Steppin Stones has been playing guitar since she was eight and booking gigs since age nine. Nine years since her stage debut, Wicklund has left her Hilton Head home and made the leap to Nashville, devoting herself fully to her band and craft.

Savannah gigs were crucial to The Steppin Stones’ early years—the band was a City Market favorite—and, while she appreciates everything she learned in her time in the Lowcountry, Wicklund’s loving the challenge of life in Music City.

“Nashville’s great,” she attests. “Everyone here is super-approachable, and there’s just a bigger music community up here, which is new for me. Every single person in Nashville is a musician—every waiter I’ve had is doing something with music.”

She’s been finding her place in the scene since August. While the power trio made the move together, Wicklund is now the sole original member of the band after the other members amicably departed.

“Ultimately, we all felt the lineup nearing its end—we were all pretty much on the same page,” she explains. “The move to Nashville also solidified that I’m going for it full steam ahead.”

As she works toward a new album, Wicklund’s writing on her own, as she usually does, but her new hometown has also allowed her to network and collaborate.

“I’m doing a lot of it on my own, but I’m also doing co-writes with musicians in town,” she says. “This is the first time I’ve gotten to play with people other than my two bandmates. For 10 years, I only played with my guys...I’d sit in with some people sometimes, but it’s kind of a whole different culture, which is new. I’m getting used to it.”

As a musician, Wicklund is a triple threat: a songwriter with a penchant for classic rock bravado and blues grit; a vocalist with a killer range and warmly raw style; and, first and foremost, a complete shredder of a guitarist.

“I consider myself all three, but I’ve always wanted to be known for my guitar playing—that’s what I’ve said since I was a little girl,” she says. “I was always trying my best to perpetuate that I love to play guitar, that’s been my main focus, and writing music comes with playing. There’s no better feeling than finishing a song you feel really feel good about.”

When she began, Wicklund learned all the iconic classic rock hits verbatim, playing solos note-by-note and following tabs. That foundation allowed her to take risks onstage and explore her instrument.

“I started to do some songs where I would improvise a little bit and I started to take more chances live,” she remembers. “The reason I got comfortable on guitar is because I tried new stuff live, and even though sometimes I’d make mistakes. I think that’s what helped shape my guitar playing—infusing all these classic rock go-to solos, then starting to riff off of them on my own.”

Playing as a three-piece pushes her to fill out space and pull a variety of tones from her guitar.

“I use a lot of open strings, and I’m not really afraid to make it sound kind of muddy at times,” she says, citing Jimi Hendrix and Jeff Beck as her primary influences.

“Both of them get a little creative, and I get a lot of inspiration from them. Even if they hit something that they didn’t mean to, they make you believe they meant to hit it.”

Throughout the years, Wicklund’s had a pretty consistent gear setup, playing a custom Tom Anderson guitar (her favored model since she was 9) and a pedalboard armed with essential effects.

“It’s changed slightly over the years, but I’ve had a pretty staple sound,” she says. “My dad helped me build my guitar tone—my dad helped me build everything when it comes to this band! I’m still playing through my Orange [amplifier]. I love my delay and reverb, and I like the flanger and phaser every once in a while. The talk box is becoming a staple, too.”

This summer, Wicklund will hit the studio with a new bassist and drummer to record a fresh Steppin Stones record in Nashville. She explains that, while it boasts the Steppin Stones timeless rock ‘n’ roll sound with a blues edge, the band’s style has evolved since their second full-length album, released in 2015.

“I always want to set the tone and make you feel something,” she explains. “I think that something we’re going to still have and carry through. I want to have songs like ‘Looking Glass’ off our last couple albums ago that are more structured. And on the flip side, I’d like to have some songs that have some cool instrumental breakdowns and stuff like that. Hopefully, we’ll have matured and our sound will have progressed a little bit.”

It’s going to be a busy spring and summer for Wicklund—when she’s not writing or recording, The Steppin Stones will be on the road, hitting festivals like Sweetwater 420 Fest, The Peach Music Festival, and KAABOO Del Mar in San Diego before embarking on their first European tour.

Even on lineups like KAABOO, which features juggernaut headliners like Tom Petty & The Heartbreakers, Red Hot Chili Peppers, and Muse, Wicklund isn’t intimidated—the fearless frontwoman’s been preparing for this moment her whole life.