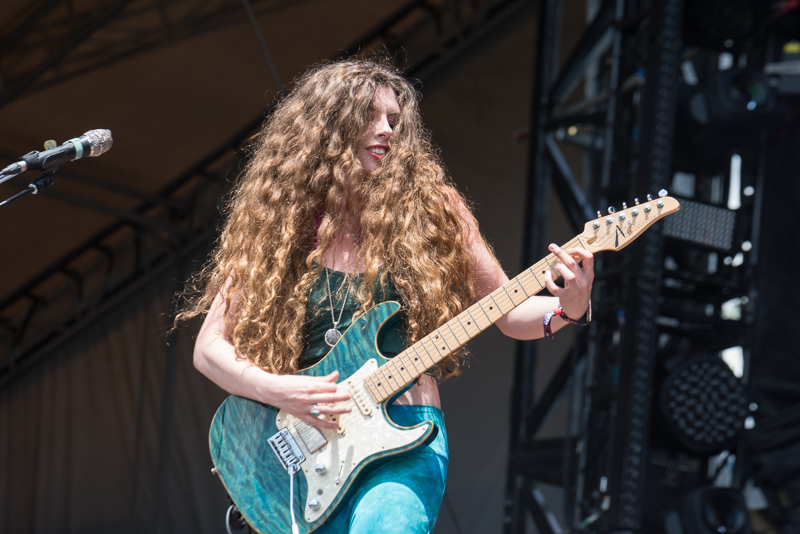 Guitarist and musician Hannah Wicklund has been writing, playing, and creating music since she was a young girl, and her love of guitar extends from this earliest memory to her current love of playing. We witnessed her polished and seasoned performance at Shaky Knees Music Festival in Atlanta, Georgia on May 3, where the crowd was in awe of her. She recalls that “my earliest memories of tapping into the power of good music was at age 6 playing The Beatles on piano, and opening for my brothers band at a bocce ball tournament.”

Her talent is so extraordinary and innate that she caught the eye of legendary rock band AC/DC’s front-man, Brian Johnson, and he had her put on private music performances beginning at the age of 13. When asked how she was connected to this prestigious musician, she shares that “our bass player was next door neighbors with [Brian] Johnson’s racing teammates, and from there it just snowballed.”

Wicklund is endorsed by Orange amplifiers and is also a huge fan of them. When it comes to guitars she enjoys playing live and in the studio, she explains that “I play Tom Anderson’s at every show religiously, but I will test out some vintage guitars like Telecasters and Les Pauls in the studio every now and then.”

Hannah & the Steppin’ Stones are currently on a lengthy North American tour with venue and festival dates slated, so be sure to catch her in a city near you. A list of tour dates and to purchase tickets can be found HERE.

Which female guitar players do you look up to and/or would like to collaborate with?

Who was your first concert, and which one has been your favorite so far?

Hannah: My first concert was Alice in Chains opening for Nickelback, and my favorite has to be Tom Petty & the Heartbreakers (all five times).

What was your first album on CD and/or vinyl?

Hannah: The first album I was very excited to buy was The Raconteur’s Broken Boy Soldier.

Which five albums and/or artists would you not want to live without?