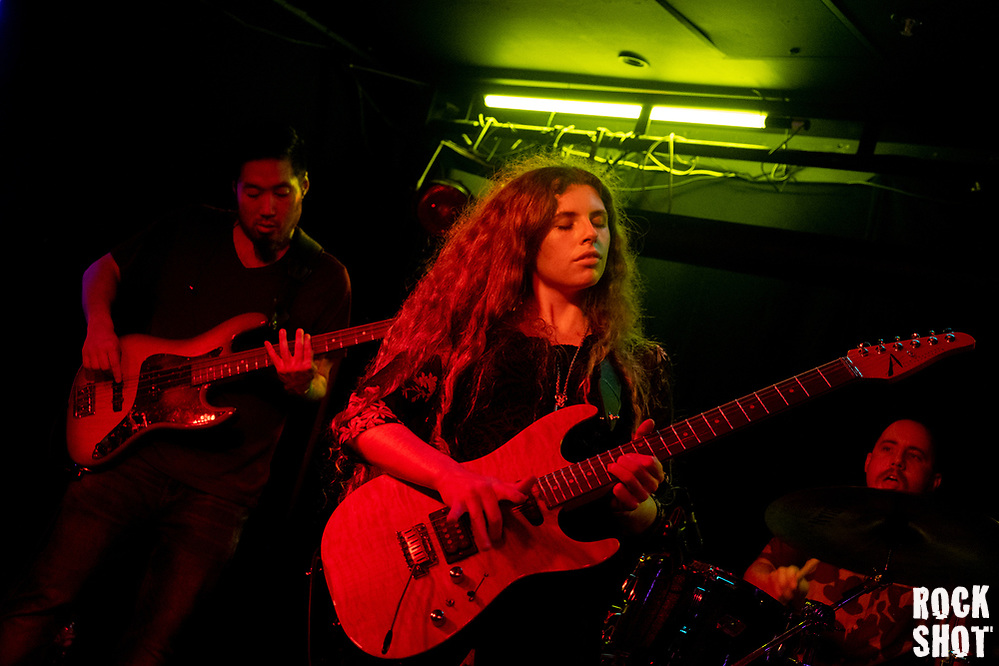 You know when you really look forward to a gig and the excitement amplifies as the week goes on? When you were introduced to a band over a year ago and their music becomes the soundtrack to your commute, work and weekend? This is how I felt when Hannah Wicklund and her Steppin’ Stones came to my town this weekend.

Along with Gorilla Riot and Piston, touring under the moniker Roadstars, they brought a hi-octane collaboration to London’s Islington. The evening of the show was drizzly and the heavens opened, conveniently, just as I exited Angel tube. Darting across Upper Street, I narrowly avoided taxis, buses and giant puddles to run the short distance to O2 Academy 2, the main venue’s 250-capacity sister.

By the time I arrived at the door, my umbrella was busted and my boots and feet, were sodden. I almost didn’t notice Hannah herself slip past; I was shivering and needed a drink. I needn’t have worried; with an intimate setting and British five-piece rock n’ roll engine Piston generating a scorching, intense sound that most definitely brought the heat, I soon warmed up.

When the vocal roar of Rob Angelico hailing from the South is greased with the musical flair of guitarists Jack Edwards and Luke Allatt, bassist Stuart Egan and drummer Brad Newlands from the Midlands, it’s a explosion of no-nonsense, slaying guitar riffs and brooding vocals. Their potent set kicked off with Dynamite and Rainmaker, included latest release Blow It Away, from their debut album Piston, and brought some AC/DC with T.N.T.

I like to think that the more intimate venues attract real music heads and staunch fans, and the appreciation for Piston, and the second band of the night, Gorilla Riot, was palpable. After a brief reshuffle of the stage, the gravelly, rich vocals of frontman Arjun Bhishma came through on Kerosene Clown. The Manchester-based quintet is also comprised of Liam Henry and Charly T. on guitar and vocals and James Degnen on bass. They showcased their unique blend of raucous blues-based rock, with added grunge, stoner and country for good measure. A sharp set included Ain’t No Use Being Good and Bad Son and bowed out with Dirty – which is just how they serve their rock n’ roll blues.

After a quick interlude and an opportunity to rehydrate, Hannah Wicklund glided on stage to appreciative whoops from the audience. South-Carolinian Hannah is the powerhouse guitarist, vocalist and songwriter of the eponymous trio, Hannah Wicklund & The Steppin’ Stones. The band deliver classic rock and blues with a contemporary slant and infectious choruses that never sound worn.

After the release of self-titled, ten-track album Hannah Wicklund & The Steppin’ Stones in the US last year to rave reviews, a September UK release via Strawberry Moon Records gave the Brits the chance to fully appreciate it. Produced by Sadler Vaden, the self-released album was recorded in Nashville and offers a fresh take on the singer’s musical influences across the decades. She is a lover of classic rock and blues, and draws inspiration from ‘60s, ‘70s and ’80s guitar-driven rock.

Hannah is mesmerising on stage, both visually and audibly, and to catch the live performance resembles the album cover coming to life in kaleidoscopic colour. Looking Glass is one of my favourite tracks on the record, and it had a raw, bluesy intensity live that took it to another level.

Latest single Shadowboxes and Porcelain Faces tackles the darkness of social media, something that 22-year old Hannah is familiar with. She sees it as a necessary evil and sings about the emotional toll it can take to live digitally. As she sang, a guy behind me whispered to his friend, ‘Wow, she’s got some pipes’ and he was spot on. Her voice can be furious and intense one minute, hitting you hard, then breaking your heart with its velvety rawness the next. The acoustic intimacy of Shadowboxes was one of the evening’s highlights.

Although relatively new to the UK live music scene, the band have created a buzz in the US for some time now. The latest release is the band’s third album; during the band’s formative years, they released two albums under the moniker The Steppin’ Stones. Hannah formed the trio when she was just eight years old and has honed the sublime synthesis of her guitar skills since then with over 2,500 live shows.

Mama Said was funky and soulful, and proved that the band can deliver on a wide range of sounds, whether slamming rhythms or exuberant guitar solos. They seem equally at home with anthemic rock bangers as they do with stripped-back acoustic numbers, both with the same explosive results.

The album’s bluesy, rocking opening track Bomb Through The Breeze, which begins gloriously without any unnecessary preamble, was highly anticipated. With blazing guitar opener, Hannah’s urgent, searing vocals and the gnarly riff in the chorus, it didn’t disappoint one little bit.

Hannah is a hurricane force on stage with expressive vocals and a classy display of her guitar chops. There’s an emotional context to the songs and evocative storytelling through her lyrics; you’re taken on a journey one step at a time with her passionate delivery and it’s executed masterfully, with intent.

As the final track played out, Hannah said in her gorgeous South Carolinian voice ‘My name is Hannah Wicklund. Give it up for the Steppin’ Stones’ and she was gone. The room felt like a void without her in it.

Hannah Wicklund & The Steppin’ Stones are one of the most exciting and enduring prospects in the world of blues rock. This is music you can’t ignore; it’ll blow your mind and charm your soul all at once.

Hannah is a triple-threat player, singer and songwriter – the real deal. Make no mistake, she’ll light you up.