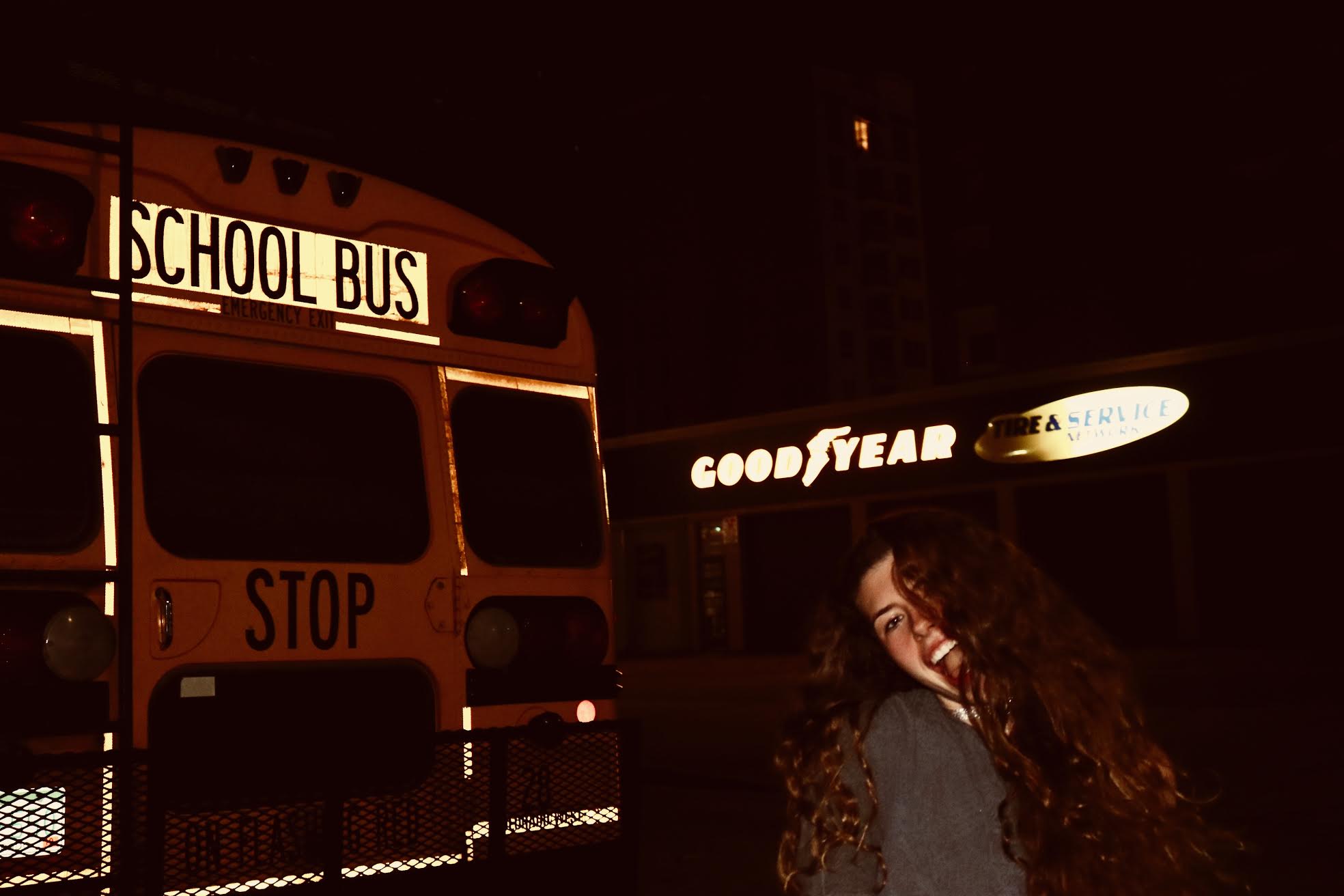 Hello! My name is Hannah and I have a Rock ‘N Roll band called Hannah Wicklund and the Steppin Stones. Since adding my name to the front two years ago, it seems like I now have the longest band name on every festival lineup, so that’s a perk! It has been an interesting past few years to say the least. I started The Steppin Stones at 8 years old on Hilton Head Island, SC, and 13 years later I find myself on the other side of the country, in California gearing up to record my sixth album/EP. With my latest release being the only one I’ve put on streaming platforms, it’s not common knowledge that I’ve been releasing original music (through CD’s I’d sell at shows) since I was a wee 12 years old. There will be plenty of time for me to tell you about when I was young in the lifetime (however long that will be) of this blog, but I’d like to start with this past New Years Eve and tell you about how I have fallen back in love with what I do everyday since.

My older sister Donell and I drove her school bus from Boulder, CO to Hilton Head for Christmas two months ago and then continued on to Florida for a New Years Eve Soul Circus party. Twelve of us dressed as carneys and piled into our hippie/gypsy bus and had an epic round of karaoke, of course including Bohemian Rhapsody. We had a magical night watching fire breathers, aerialists, and danced like fools. The real magic happened though, when we realized that we had parked the bus across the street from a Good Year Auto parts store. Never mind that we found 4 empty car spaces perfectly in a row downtown West Palm Beach on New Years, but it was a GOOD YEAR. On New Years Eve! The humor, omen, message, whatever you call it- wasn’t lost on me. I must say, it has indeed been a very good year so far.

I promise to elaborate and tell you why 2019 has been been so great, but first, can I be honest? In case you haven’t heard from anyone else, the music business is hard. Especially when you move out of your parent’s house (love you mom and dad!), straight into a house with your drummer, who soon after also becomes your boyfriend. Yes, I know Fleetwood Mac. Yes, I had to learn that lesson the hard way. No, I can’t promise I’ll never make that mistake again (my brother AND my dad are drummers... they are my kryptonite, what can I say?). That all being said, I have nothing but love for that time in my life as I learned more about myself than I could have hoped for. It did however leave me in a vulnerable spot when we called it quits and we had just moved to Nashville with a completely booked touring schedule for the year, starting in 3 weeks.

I’ve been in somewhat of a transition period ever since, balancing finding committed band members, writing/recording new music, touring non-stop, navigating the music business as a young female, and becoming an adult. All of those things are hard enough on their own, but throw in your first breakup, in a new town (under 21) and things can get a little overwhelming. Like I said though, I’ve learned more than I thought possible in such a short amount of time.

One day soon you’ll hear a song of mine called ‘Witness’ that sums all of this up for me and talks about “embracing the heartbreak”. That’s the beauty in songwriting. It has the ability to make me self-reflect like nothing else, and really dig into the pain that we all desperately try not to feel. It’s a safe space to explore and process emotions that when left black and white, don’t make much sense. Music brings back to life these parts of myself that I’ve hidden away and serves as a kind of therapy that I’m so grateful for.

Don’t get me wrong, it’s not that I ever fell out of love with the music, but more with everything that comes along with it. A big part of why I’ve taken these last several months off touring is to just recover physically from the ware of the road, and also to feel what it’s like to not play a million shows all the time. In my life I’ve played a little over 2,600 shows, and that starts to take a toll. But, when I saw the glowing yellow sign screaming to me that it was going to be a good year, I grabbed ahold of it and have taken it with me. Guess what?? It has been significantly the most creatively rewarding and inspiring year of my life already, and we are just two months into it.

The catalyst behind this creative renaissance I’m currently in was Mexico. At the beginning of January, some friends of mine The Cordovas (Go check them out- holy shit!), invited me down to play their festival in Todos Santos. It was a collection of artists and musicians that came together for 10 days to play music all around a small fishing town to locals and tourists alike to raise money for their fire department. Really, it was more of an epic jam session than anything else.

I flew down there not knowing who was going to be my rhythm section- they essentially had all these frontmen and women come down (including Joan Osborne, Autumn Defense, Daniel Denato, etc.) and play with a house band. When we got together to rehearse before my first set, I was driven in a golf cart from my hotel, down a few dirt roads, to this tiny house that goes by the name of Casa Azul. In Casa Azul there was no drum set, but rather a snare drum and a metal desk with a kick pedal attached to it. I plugged into a 5 watt amp and I had the most fun practicing than I’d had playing music in a long time. That really set the tone for the rest of the festival for me, and I proceeded to make some lifelong friends that inspire the hell out of me.

One of those people is a man named Steve Poltz. Let me first describe Steve. He is a spirited, radiant, honest, and kind person, who also happens to be an amazing songwriter, storyteller and performer. He emotes everything. I’ve never had anyone make me laugh and cry (literally) in the course of one song. His pure excitement and joy for life reminded me that it is cool to care. So much of music is veiled in mystery and smoke and mirrors, and I can’t tell you how many times I’ve been cool-guyed over the years. Cool-guying is the act of someone who thinks they are too cool to talk to you and therefore makes you feel strange for simply striking up a conversation. Moments like those are what make me really appreciate people like Steve.

Keep in mind that Steve is just one out of thirty or more amazing people I met down in Mexico, but he’s the only one that I wrote a song with. We instantly connected when we met, and seeing as we were hotel room neighbors, we got together one morning and co-wrote a song. It was a really beautiful few hours where I was able to be vulnerable and write something a little out of my normal realm. Steve had already been noodling around on guitar and had set the tone for the song with me in mind, and I loved it when he played it for me.

Anytime I do a co-write, I like to start with a conversation and really get to know the other writer. Steve and I talked about a lot of things that morning, and it led to a song called ‘I Hope I Find you Somewhere’. Later that night we got up and played it in the backyard of a restaurant, in true Todos style, and it was a really rewarding couple of minutes. Not only was it a different style song than I’ve normally written, but it’s one of the few times I’ve ever sang onstage without my guitar. Steve surely brought me a little out of my comfort zone, but we all know that’s when the real growth begins. I’ve attached a video of us playing this song, and I hope you like it.

My goal with this blog is to give you a little peek into the in-between of my life. To share with you the quirky, funny, sometimes sad stories that have led to the music you hear and the art you see. There’s so much I wanted to write about in this first installment, but I thought sharing the story of what brought me back to life so to speak was a good place to start. We all need reminders sometimes, and Mexico was one that life is meant to be an adventure, and it’s not about being perfect, but rather authentic and enjoying every moment of it. My deepest apologies go out to anyone who knows how to properly use commas and parenthesis, I did my best and that is all I can do for now! I cannot wait to butcher more grammar and share more stories from my life with you all!