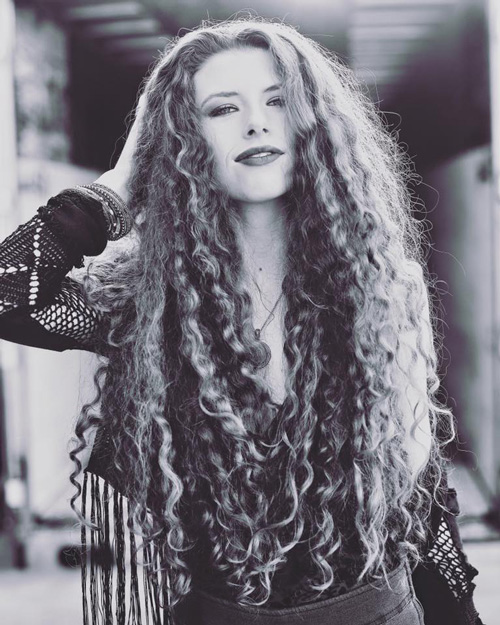 They’ve already logged over 1500 performances, released two full-length albums, and have justrecorded a new album for release in early 2018 (exact date TBA) that was produced by Sadler Vaden, guitarist for Jason Isbell & the 400 Unit.

Introducing THE STEPPIN STONES, an American rock ‘n’ roll band originally from Hilton Head Island, South Carolina and based out of Nashville. They’re fronted by 20-year-old singer, songwriter and incendiary guitarist HANNAH WICKLUND who formed the band when she was nine.They’ve evolved over a decade and shared stages with artists such as Lyle Lovett, Jason Isbell, and Rusted Root. This summer and fall, THE STEPPIN STONES are on the road with a busy itinerary including an appearance at the Kaaboo Del Mar festival in CA on 9/17 that will be preceded by a show at the Viper Room in Los Angeles on 9/16 (see all dates below).

Onstage, WICKLUND‘s signature curls fly through the air, transporting back to the time of the first female rock star, Janis Joplin. Capturing the old soul of a new generation, WICKLUND‘s singing voice and guitar playing have earned her comparisons to blues/soul musician Susan Tedeschi. For a video of the band performing their song “False and Hollow,” click here.

Q: You’ve already performed over 1500 shows-rare for a young artist and band. If you overheard one fan talking to another after leaving a show of yours, what would you like to hear them say about the gig?

A: “I would love to hear anyone walking away from our show say that it was the best thing they’ve seen in a long time and that they can’t wait to see the next one. For me, playing live is the epitome of what being a musician is all about, and I aim to one up myself every show. Although I wouldn’t categorize us a jam band, we love to do just that. So hopefully anyone who catches us for the first time will be intrigued enough to come experience it again, and look forward to hearing something new, even if they see us four nights in a row.”

Q: In early 2018 you will release your third full-length album. In what ways do your new songs build on your previous material?

A: “I feel my songwriting has matured over the last few years, both lyrically and musically. I’m definitely proud of what I’ve done previous to this new album, but hearing these latest songs finished for the first time, I was able to recognize the overall development my music has gone through. A lot of it came with getting older and living more life; experiencing things that were well worth a song or two. I’ve always had a more serious and expressive tone to my music, which is still prevalent, but in the last year my songs have started to cover a wider array of feelings and are able to emote more than just a moody song in A Minor. Working with a producer that shared my musical taste, similar path, and home state had a lot of impact as well. Sadler did a great job of taking what I envisioned and refining it so that every part was suiting the song.”

Q: You’ve played many festival gigs. What is the challenge of a festival gig compared to your own show?

A: “A festival is a whole other beast from having our own headlining show in a club. There’s so much more going on and so much more room for error, but the payoff is well worth it. At a festival, you have this moment to grab a whole new audience and really prove that you deserve to be there. To me they’re a little more raw and exhilarating, with a whole different kind of energy.”

Q: Can you describe your best gig ever-and your worst one?

A: “Our best show we’ve played was opening up for The Marshall Tucker Band at the Lucas Theatre in Savannah, GA. That was the place where I became fixated with the idea of being a musician. For my fifth grade graduation my parents got me tickets to see Susan Tedeschi, and by some miracle I got to surprise her with flowers at the end of her set on the stage, and then she and I spoke for a few minutes and it has stuck with me forever. Playing on that stage for the first time was a great reminder of that moment.

My worst show was technically playing to a completely empty bar when I was 15…we didn’t even see anyone who worked there for half an hour. But they still insisted on us playing to no one.”

Q: Is there a song you crank up on Friday night to kick off the weekend-and a song you kick back with on a Sunday morning?

A: On a Friday night I feel like “Renegade” by Styx is a solid choice. But on a Sunday morning, anything by CSNY would be perfect.